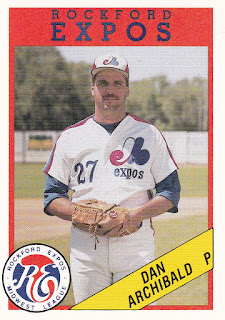 Dan Archibald's San Jose State club opened conference play in March 1988 and Archibald helped make sure they opened it with a win.

Archibald's stat line included four hits given up, no walks and a total of 14 strikeouts, with San Jose and Archibald coming away with the 9-2 victory, according to The Los Angeles Times.

Archibald pitched well enough that season to get the notice of the Expos, taken in that June's draft. He couldn't do well enough to get a long pro career. His career lasted just three seasons.

Archibald's career began that year, taken by the Expos in the 14th round of the draft, out of San Jose State University. He went to San Jose out of Santa Clara High School in California.

With the Expos, Archibald started at short-season Jamestown. Over 18 games, seven starts, Archibald put up a 4.58 ERA, while striking out 36.

Archibald started 1990 at single-A Rockford. In 13 relief outings, 22 innings of work, he gave up nine earned. He then moved to the Angels system, playing at single-A Quad Cities and high-A Palm Springs. It was his final season as a pro.