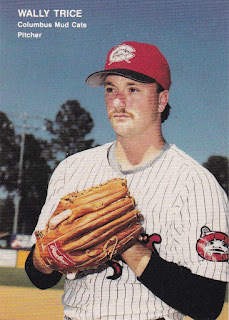 Wally Trice tried to find a new pitch and he found one - a variation on the screwball, according to The Orlando Sentinel.

He looked for that pitch, he told The Sentinel, after coming to a realization about his playing future after college if he didn't find one.

''I knew in college if I was going to stay in baseball I needed a new pitch,'' Trice told The Sentinel. ''I wasn't going to blow 82-mph fastballs by anybody.''

Trice used his new pitch to turn pro, but he could never take it to the majors. He made AA over three seasons, but he never made it higher.

Trice's career began in 1988, taken by the Astros in the 15th round of the draft out of Alliant International University in California.

Just before the 1988 draft, Trice talked to The Los Angeles Times about the lengths he went to in high school to learn another pitch, the split-finger fastball.

"I used to tape tennis balls between my fingers before I went to sleep," Trice told The Times. "Then baseballs, then softballs. It was pretty painful for a couple hours, then I'd get to sleep."

Trice started with the Astros at short-season Auburn. He turned in a 1.90 ERA over 14 outings. He then played 1989 at single-A Osceola, Trice gained some attention, according to The Sentinel, with antics like ensuring he pitched with an ALF T-shirt under his jersey.

Overall, Trice proved himself 16-4, with a 2.57 ERA. He threw a seven-inning complete game for a June win.

He jumped to the Indians system and AA Canton-Akron for 1992, returning there in 1993. He also spent time in 1993 in Taiwan, playing for the Mercuries Tigers.

After not being recorded as playing in 1994 and 1995, Trice's final pro time came in 1996 with independent Amarillo. He got into eight games, starting five, at Amarillo, ending his career.