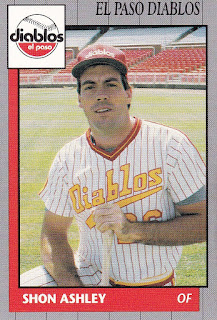 Shon Ashley headed off to rookie Helena in 1985 knowing the Brewers had confidence in his potential, according to The Associated Press.

The Brewers handed Ashley a sizable amount and told Ashley he should expect for or five years in the minors and that he stood a good chance of making the majors, he recounted to The AP.

"They wouldn’t have put that much money into me if they thought I didn't have a chance," Ashley told The AP.

Ashley went on to play eight seasons as a pro. He made AAA, but he never made the bigs.

Ashley's career began that year in 1985, taken by the Brewers in the third round of the draft out of Meridian High School in Idaho.

Ashley played his first season with the Brewers at Helena. He hit .295 in 46 games. He also stole eight bases.

Ashley then hit single-A Stockton for 1988. He told The Lodi News-Sentinel that July of the pressures minor league life created on his family. If it became obvious he wouldn't make the majors, he'd move on.

"It's hard on my wife," Ashley told The News-Sentinel. "She wants the kind of life where we own a house, not live out of a suitcase."

That May, he put together a 14-game hitting streak, according to The El Paso Times. And he extended it to 14 on a home run.

"I've just been getting good pitches to hit," Ashley told The Times. "I got a few hits and started to not force things, just let it happen. That's when I hit best, when I don't force it or press."