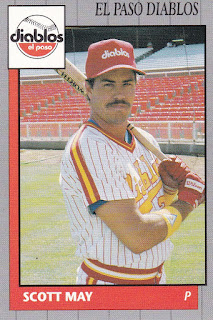 Scott May went from an unheralded small college pitcher to being drafted into the Dodgers system by chance, he recounted The Oklahoman years later,

His main stats didn't say much, but a Dodgers scout happened upon him and almost didn't believe what he saw, May told The Oklahoman.

May went on from that chance meeting to a long career in the pros - and to two stints in the majors with the Rangers and the Cubs.

May's career began in 1983, taken by the Dodgers in the sixth round of the draft out the University of Wisconsin at Stevens Point.

May started with the Dodgers at rookie Lethbridge. He saw 13 games, started six and ended with a 5.01 ERA.

After another year back at San Antonio in 1987, the Dodgers traded him to the Rangers. Assigned to AAA Oklahoma City, the Rangers brought May up as a September call-up.

May got into three games for the Ranges in September 1988, starting one. He gave up seven earned in 7.1 innings of work.

He returned to the minors for 1989 and 1990, moving to the Brewers system in the process. He played 1990 between AA El Paso and AAA Denver.

May signed with the Cubs for 1991 and got his second look at the majors. He made two appearances, giving up four earned in two innings of work.