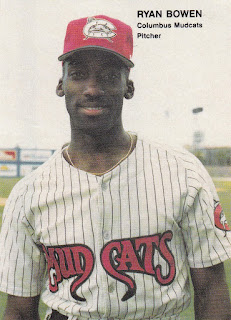 But he also gave up two runs, on a balk and a sacrifice fly. He then went on to lose the no-hitter in the sixth, Bowen ultimately giving up six runs, The Associated Press wrote.

"That's the way they do it in the majors," Bowen told The AP. "That's why they make millions of dollars."

Bowen went on to pitch in five major league seasons, earning a reputation as a hard-luck pitcher. That reputation was no more so apparent than as Bowen pitched as a member of the inaugural starting rotation of the Florida Marlins.

Bowen's career began in 1986, taken by the Astros in the first round of the draft out of Hanford High School in Hanford, Ca.

With the Astros in 1991, Bowen started 13 games, going 6-4, with a 5.15 ERA. In September, Bowen threw seven innings of shutout ball, before being lifted after a double in the eighth. He went on to get a no decision in the Astros loss.

Bowen returned to the Astros for 1992, starting nine games. But he also went without a win, going 0-7, with a 10.96 ERA. The performance was enough for the Astros to leave him unprotected in that November's expansion draft and enough for the Marlins to select him.

"It feels good to finish something you started," Bowen told The South Florida Sun-Sentinel afterward. "I'm not talking about a complete game. It's the opportunity to go and get asked to finish what you started, to have them say 'Bo, go out and get the last out,' after the way the team fought hard all night."

At one point that year, though, he picked up only one win in 10-straight starts. That stretch was something he told The Sun-Sentinel in July he wasn't too concerned about.

"If you harp on wins and losses you'll drive yourself crazy," Bowen told The Sun-Sentinel after finally getting another win in July. "I'd rather harp on pitching well."

Bowen, though, returned for just eight starts in 1994, going 1-5. In seven of those starts, into early May, Bowen failed to get a win. His only win came in August.

Going into 1995, Bowen tried to overcome an injury suffered playing basketball in the off-season. The injury required reconstructive knee surgery. Bowen didn't return to the majors until September, getting four final outings and picking up two wins to no losses.

Bowen played two more seasons in the minors, and a third in independent ball, ending his career without returning to the majors.