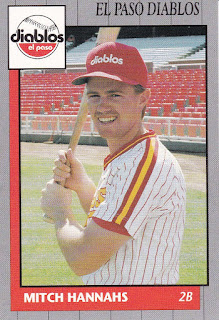 Mitch Hannahs' Indiana State team lost this game 8-1 in the NCAA regionals, but he saw a point early on where the game could have changed, he told reporters afterward.

In the first inning, his team threatened, but a ball that almost got down ended up getting caught and ending the threat.

Hannahs took his team to the NCAA regionals that year in his first year as head coach and amid a long career as a college coach an assistant that continues with Indiana State in 2019.

He turned coach after a professional playing career that lasted three seasons. He made AA, but not the majors.

Hannahs' playing career began in 1989, taken by the Brewers in the 16th round out of Indiana State.

Hannahs played his first year at single-A Beloit. He hit .316 in 64 games. He also hit three home runs and stole 14 bases. He scored twice in one July game and knocked in a run on a grounder in another.

Hannahs then started his coaching career by 1995 when he returned to Indiana State as an assistant. He stayed in that role through 2001. Along the way, he helped coach Clint Barmes. Hannahs took no credit for Barmes' development upon Barmes' retirement in 2016, according to The Terre Haute Tribune Star.

"Guys develop themselves for the most part. There's a little push here and there. Clint was one of those guys, he knew what he needed to do to become a better player," Hannahs told The Tribune Star.

Hannahs then moved to Lincoln Trail College as head coach. He served there for nine seasons. He returned to Indiana State in 2013 as head coach.

"He is an exceptional leader, a true tactician and he has continued to build upon the tradition of Sycamore baseball," Indiana State AD Sherard Clinkscales said in announcing the extension. "His teams consistently compete at a high level on the field in a tough conference, excel in the classroom and are active in the community. I look forward to Coach Hannahs' leadership of the baseball program in the future."
1990 Minor League Tally
Players/Coaches Featured:3,036
Made the Majors:1,116-36.8%
Never Made Majors:1,920-63.2%-X
5+ Seasons in the Majors: 466
10+ Seasons in the Minors:276
Posted by Steve78 at 10:29 PM