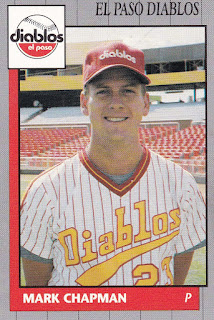 The El Paso Diablos only needed starter Mark Ambrose and reliever Mark Chapman to pitch the Diablos to a victory this night in June 1991, according to The El Paso Times.

"Ambrose and Chapman had outstanding games," Diablos manager Dave Huppert told The Times afterward. "We needed this in a big way."

Chapman finished up that game in the midst of his fifth season as a pro. He only saw one more. He never made AAA.

Chapman's career began in 1987, taken by the Brewers in the 18th round of the draft out of Auburn University.

His sixth complete game of 1987 gave Auburn a regional win. It also gave him the school record for innings pitched. He ended with 343.1 innings pitched, more recently sixth all-time.

Chapman started with the Brewers at rookie Helena. He went 3-1 there, with a 1.31 ERA over 27 relief outings. He also saved 13.