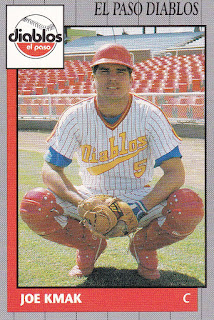 Joe Kmak and the Denver Zephyrs pressed all the way to the AAA American Association title in 1991 and Kmak did his part by winning series MVP honors, according to The Buffalo News.

To The News afterward, the catcher looked back on the season and his team.

"This team has been down all year, but we had five or six must games and we won them all," Kmak told The News. "I've never been on a team that has more character in my life."

Up to that point in his career, Kmak had been on teams over six professional seasons. Two seasons later, he'd be on another team, in the majors.

Kmak's career began in 1985, taken by the Giants in the 10th round of the draft out of the University of California, Santa Barbara.

Kmak got into 51 games for the Brewers that year. He hit .218, knocked in seven and stole six bases.

He then played 1994 at AAA with the Mets. He came back from an error in a June game to help his team to the win, The Norfolk Virginian-Pilot wrote.

"Except for the error it was a good game for me," Kmak told The Virginian-Pilot. "Any time you can get a win from your starting pitcher, it is."

Kmak continued playing in the minors over the next three seasons. He saw Indianapolis, Charlotte and Omaha, but he didn't make it back to the majors.