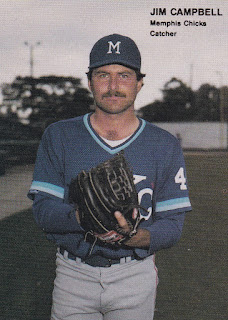 Jim Campbell made his major league debut, but it didn't go as he'd hoped.

Having started the year at AA Memphis, Campbell found himself in Kansas City by August. He also found himself going just 4.2 innings and giving up seven earned runs.

"We've been struggling for runs all season at Memphis and Omaha," Campbell told The Associated Press afterward. "I get up here and I get eight runs and I can't go five. I know I threw a lot of high pitches."

Campbell did get another start with the team. But that second start was also his last in the bigs, his major league career ending up consisting of just those two outings and no more.

Campbell's professional career began in 1987, taken by the Royals in the 32nd round of the draft, out of San Diego State University.

Campbell started with the Royals at short-season Eugene, getting 32 relief outings. He also picked up 10 saves.

That July, he spoke with The Eugene Register-Guard on the topic of beanballs. Campbell told the paper he would never throw at anyone's head.

"There are certain times when a pitcher wants to throw a ball high and tight," Campbell told The Register-Guard. "An 0-2 count, or after a home run. You try to keep a hitter honest."

In 1990, though, Campbell also got his first look at AAA Omaha. He also switched to starting. He got 12 starts at Memphis, and four at Omaha. In August, he was starting in Kansas City.

After that poor start in his major league debut, Campbell's second start was better. This time, he went five full innings. He also gave up two runs - and earned the win.

In April, with Memphis, Campbell went seven scoreless, in a game Memphis went on to lose in extras.

"He (Campbell) was a smart pitcher," Orlando hitter Dave McCarty told The Orlando Sentinel. "He didn't come in with the same pitch all the time."

For 1993, Campbell again split time between Omaha and Memphis, but it was his final year as a pro, his career ending with season's end.