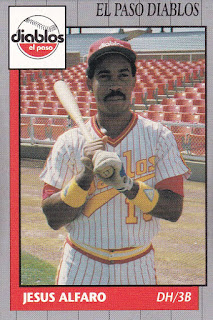 Jesus Alfaro first arrived at El Paso in 1985 and went on to spend five seasons there.

During that time, El Paso owner Jim Paul got to know him well, according to The El Paso Times, and he knew Alfaro as a "good, good human being and an outstanding gentleman."

"He is by far the most popular player we've ever had here," Paul told The Times of Alfaro. "He concerns himself with helping, the younger players and he concerns himself with the fans, hoping they enjoyed a play, an effort. And I'll tell you this. I think it's just blind stupidity on behalf of the major leagues that Jesus has never spent a day in the big leagues."

Paul spoke to The Times of Alfaro in 1990, Alfaro's 14th season in the pros. He spent stints at AAA over five of those seasons, but he never did make the bigs.

Alfaro's career began in 1976, signed by the Phillies as a free agent out of his native Venezuela.

Alfaro moved to the Orioles for 1982. He played four games at AAA Rochester and the rest at AA Charlotte.

Going into 1983, Alfaro got an invite to major league camp. It turned out to be his only major league invite over his career. He remained there for 18 days, saw two B games and got sent back to AA, he told The Baltimore Sun years later.

"The Orioles were my favorite team when I was a kid. Boog Powell. Brooks Robinson," Alfaro told The Sun. "Then when I got to the Orioles, I said, 'Yeah, I'm going to get to the big leagues now.' "

Alfaro returned to Charlotte that year and the next. He moved to the Brewers system and El Paso in 1985. Outside a season with the Angels in 1988, he largely stayed at El Paso through the end of his minor league career.

Alfaro saw time in Mexico through 1994. He then started his post-playing career as a coach. He served as an extended spring training instructor for the Orioles over four seasons, He then managed the rookie Gulf Coast League Orioles for five. More recently, he served as an assistant coach at short-season Aberdeen in 2010.
1990 Minor League Tally
Players/Coaches Featured:3,047
Made the Majors:1,121-36.8%
Never Made Majors:1,926-63.2%-X
5+ Seasons in the Majors: 466
10+ Seasons in the Minors:277-X
Posted by Steve78 at 10:33 PM