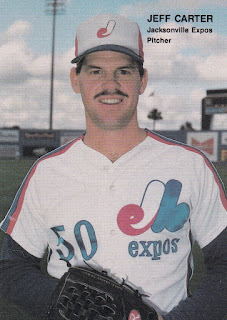 Jeff Carter hoped for a spot in the White Sox bullpen in 1991. He also hoped he could fill the role of departed ace White Sox reliever Barry Jones, he told The South Florida Sun-Sentinel.

"I think I'm capable of filling Jones' role," Carter told The Sun-Sentinel that spring. "I think there are four or five other guys who can, too. It will be tough for an individual to put up the numbers Jones did last season. But we can easily exceed those numbers if we do it by committee."

Carter had yet to make the majors at that point. He eventually did that season, but he couldn't fill Jones' role. He got into five games for the White Sox that year, starting two. Those five games ended up being the extent of his major league career.

Carter's pro career began in 1987, taken by the Expos in the 19th round of the draft out of the University of Tampa.

With the Expos, Carter started at short-season Jamestown. In 31 relief outings, Carter finished with a 2.34 ERA. He made single-A Rockford in 1988, then split a shortened 1989 between single-A West Palm Beach and AA Jacksonville.

Carter spent his 1990 season back at Jacksonville, he also pitched well. In 52 outings, seven starts, Carter's ERA came in at 1.84. He also picked up 15 saves.

Carter then arrived with the White Sox, sent there with Tim Raines for Ivan Calderon and Jones. He started the year at AAA Vancouver. His first call to Chicago came in July.

He debuted as a starter July 31 against the Rangers. He gave up two earned over three innings. He returned Aug. 15 for another start. In five innings, he gave up five earned. He got three more outings, each in relief. He didn't give up another run. He also didn't make it back to the majors.