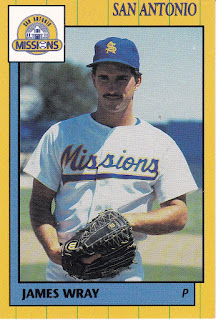 James Wray started off his pro career in 1988 at rookie Great Falls and he started it strong, according to The Great Falls Tribune.

At one point that June, the reliever struck out 12 of 15 batters he face. He also earned the description from The Tribune of "a southpaw who pitches aggressively."

Wray went on from that start to turn in a 2.04 ERA on the year. He played in four more seasons. He made AA, but not the bigs.

Wray's career began that year in 1988, taken by the Dodgers in the 19th round of the draft out of Troy University in Alabama.

At Troy, Wray helped the school to the 1987 Division II national championship as the staff ace. He went on a streak of 36.2 scoreless innings and made first-team All-America. He won all-conference honors in 1987 and 1988.

After starting with the Dodgers at Great Falls, he moved to single-A Bakersfield and AA San Antonio in 1989. He posted sub-2 ERAs at both stops, including a 1.27 ERA in 41 outings at Bakersfield.

Before moving to San Antonio that July, he set down four of five batters he faced for a save, including, including stranding runners at second and third in the eighth.

Wray then returned to San Antonio for 1991, but played 1992 back at high-A Vero Beach. He turned in a 2.95 ERA over 47 outings at Vero Beach to end his Dodgers career.