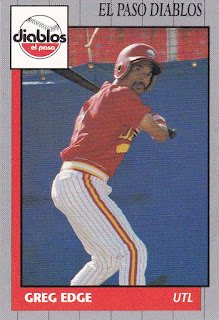 Greg Edge spoke to The Oklahoman in April 1986 and he tried to look ahead.

He starred at the University of Oklahoma, but gotten in trouble with the law through drug sales. He spoke to The Oklahoman while still in a work release program, having served time in jail. But he also spoke as the Phillies had already taken a shot on him, inviting him to spring training.

"I'm getting another chance to play," Edge told The Oklahoman. "I'm just trying to do that and leave all of the rest behind."

Edge took advantage of that second chance. And, while he didn't make the majors, he went on to a seven-season career where he made AAA. He's also since returned to the game in a clubhouse role for the Reading Phillies, a team for whom he once played.

Edge's pro career began that year in 1986, signed by the Phillies as a free agent. He went to Oklahoma and Sacramento City College.

Then-Phillies scout Doug Gassaway explained later to The Philadelphia Daily News why he signed Edge, something he had to go to the prison, where Edge was being held, to do.

"The president of the University of Oklahoma and the coaches there all stood behind him," Gassaway told The Daily News. "I traced his background down as well as I could, and everything I heard was that he was a good kid who made a bad mistake."

But Edge soon did leave the rest behind. He played his first season largely at single-A Clearwater and Spartanburg. He also saw a game at AA Reading. He hit .220 on the year and stole 26 bases.

Edge started 1989 at Reading, then moved the Brewers system and AA El Paso in a trade. He then started 1990 there, before he moved to the Pirates and AA Harrisburg mid-year.

In 2017, Benjamin Hill, a writer at MiLB.com, caught up with Edge in Reading. Edge had settled there and spent 15 years working at the ballpark, where he heads the Clean Team. He's also spent time coaching youth.