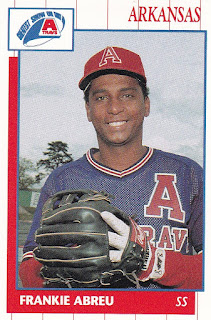 Fernando Valenzuela worked his way back to the majors in 1991 and he also worked his way through the Arkansas Traveler lineup, including shortstop Frankie Abreu, according to The Associated Press.

Abreu could only marvel at Valenzuela's performance, The AP wrote.

"He threw his fastball in and out and then came with his screwball or curve, and those were some nasty pitches," Abreu told The AP.

Abreu's career began in 1986, signed by the Cardinals as a free agent out of his native Dominican Republic. Abreu was also credited as Frank Abreu and Franklin Abreu.

Abreu started with the Cardinals at rookie Johnson City. He hit .226 in 48 games.