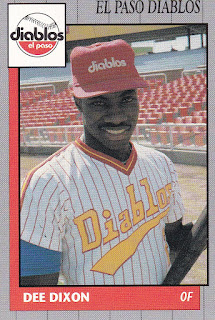 Dee Dixon beat out the throw to first in this July 1987 game for AA Shreveport and he did it in a critical spot - with the score tied in the ninth, according to The Shreveport Times.

He did so by hitting the ball to short. He soon scored the winning run, The Times wrote.

"I'm working on a new thing," Dixon told The Times of the hit. "I'm trying to smack it at the shortstop when he's playing real deep. Anything in the gap (between short and third base) is a base hit."

Dixon legged out that hit in his second season as a pro. He went on to play in three more. He never made AAA.

Dixon's career began in 1986, taken by the Giants as their 17th pick in the draft out of his native Poughkeepsie, NY. Dixon was also credited by his given name, Andrew Dixon.

Dixon started with the Giants at short-season Everett. He got into 56 games and hit .220. He stole 37  bases.