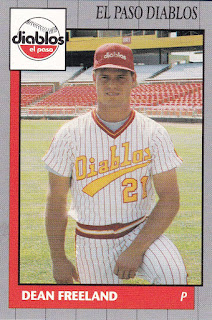 Dean Freeland made AAA for the first time in 1989, but his stay was brief. A muscle injury also limited his time.

Back at AA Shreveport that August, Freeland contemplated his future to The Shreveport Times. And his future, he still believed then, lie in the majors.

"I still think I can pitch in the majors," Freeland told The Times. "The thought of walking away doesn't cross my mind. It can't. If it does, I might as well give it up now. I can't get the job done that way."

Freeland pitched that year in his sixth professional season. He went on to play in two more. He returned to AAA, but he never made the majors.

Freeland's career began in 1984, signed by the Brewers out of Kettle Moraine High in Wisconsin.

Freeland started with the Brewers at rookie Paintsville. He went 5-2 over 10 outings, with a 2.04 ERA.

Freeland returned to Shreveport for all of 1987 and went 12-9 on the year, with a 3.27 mark. That April, he took a no-hitter into the seventh inning against Arkansas.

Freeland played at Shreveport again for 1988. He went 11-11, with a 3.38 ERA. He threw a five-hitter in a June game that saw Giants owner Bob Lurie and Giants president and GM Al Rosen, The Times wrote.

"They put me on the (winter) roster," Freeland told The Times when asked if he thought he'd impressed the brass, "and I should be pitching more like this than I have been."

Freeland played another year at Shreveport in 1989 - and got his three-game look at AAA Phoenix. He then moved back to the Brewers system and AA El Paso for 1990.

That July, Freeland threw a two-hit shutout against his old club Shreveport.

"It was my best outing of the year," Freeland told The El Paso Times afterward. "Tonight I was hitting my spots better than I have at any time in my career. That's why I threw so well."