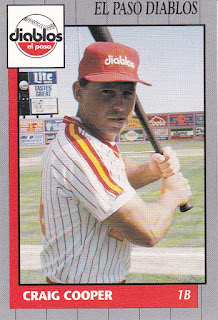 Craig Cooper looked to show he still had power in 1987, according to The Reno Gazette-Journal.

Cooper ended up hitting 11 total home runs that year. He went on to play in five more seasons after that, but he wouldn't hit more in one campaign. He also never saw the majors.

Cooper's career began in 1986, taken by the Padres in the fifth round of the draft out of Georgia Southern University.

At Georgia Southern, Cooper knocked in 94 runs to go along with his 26 home runs. His 94 RBIs led the nation that year. He also received an invite to try out for Team USA.

He made the school's wall of fame in 2009. He recounted to the school then how he went through a mini-slump and called home to his father. He had a dead bat and needed a new one.

"So I go and buy a bat and then proceed to hit six home runs the next two days," Cooper recalled to the school's site. "That was one of the million memories that you take with you and live the rest of your life thinking back on."

Cooper started with the Padres at short-season Spokane. He hit .283 in 72 games. He also hit four home runs and knocked in 50.

Cooper made AAA Las Vegas for half of 1989. In 53 games there, he hit .249, with five home runs. He played the other half of the year back at Wichita.

"Moving to a new team and playing in front of new fans had put some pressure on me," Cooper told The Times. "I guess I'm starting to settle down."