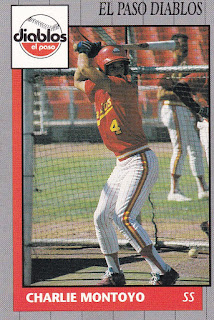 Charlie Montoyo made his first major league at bat in this September 1993 game count. He did so by  knocking what turned out to be the game-winning single.

"The first impression you make," Montoyo told reporters afterward, "is always important and this one was great."

Montoyo made that first impression in his seventh professional season. He went on that September to play in three more games for the Expos. Those four appearances turned out to be his only appearances in the majors.

Montoyo, however, took the impressions he made as a player and turned them into a career as a coach and manager. He spent two decades in the Rays system managing in the minors and then coaching in the majors.

In October 2018, the impressions Montoyo made earned him a major league managerial job - with the Toronto Blue Jays.

Montoyo's long career in the pros began in 1987, taken by the Brewers in the sixth round of the draft out of Louisiana Tech University.

Montoyo started with the Brewers at rookie Helena and single-A Beloit. He hit .270 on the year with five home runs.

Traded to the Expos for 1993, he played the year at AAA Ottawa before getting his call up to Montreal that September. In his four appearances, he went 2 for 5. His other hit knocked in two.

Montoyo played 1994 and 1995 at AAA for the Phillies, then 1996 in the minors with the Expos to round out his playing career.

Montoyo soon signed on with the new Tampa Bay Devil Rays as a minor league manager. He served 1997 at the helm of rookie Princeton, watching over future major leaguer Jared Sandberg, among others.

"I knew from watching him in spring training he was going to be my best player," Montoyo told The Tampa Bay Times that July of Sandberg as Sandberg played well all around. "He's hitting, he's playing great defense, he's got power. I knew he would be good but not as good as he's doing now."

Montoyo managed at single-A Charleston in 1999, then AA Orlando in 2003. In 2007, he arrived at AAA Durham. He stayed there seven seasons and became the team's all-time winningest manager. He also made the league's Hall of Fame.

He returned to the majors in 2015 as Rays third base coach. He served as bench coach in 2018. Then, in October 2018, he was named Blue Jays manager. Toronto GM Ross Atkins told reporters after the hire that team was impressed by both his experiences and approach.

"Charlie is passionate about the game, with a superior ability to connect and relate, and we are confident he will have an overwhelmingly positive influence on Blue Jays players and staff," Atkins said in a statement. "On a personal level, I am looking forward to working with him as we continue to build and sustain a championship organization."
1990 Minor League Tally
Players/Coaches Featured:3,048
Made the Majors:1,122-36.8%-X
Never Made Majors:1,926-63.2%
5+ Seasons in the Majors: 466
10+ Seasons in the Minors:277
Posted by Steve78 at 11:19 PM