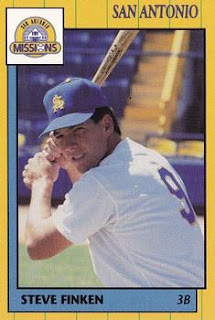 Steve Finken had no idea he'd get cut by the Dodgers in spring 1992, he told The Shreveport Times later.

The four-season veteran hadn't made the majors, though he'd briefly made AAA. But, he told The Times, after being cut, he knew he wanted to continue his pursuit of the bigs.

"I still wanted to keep my hope and dream alive," Finken told The Times. "I wasn't ready to give up on that."

It took some weeks, but Finken did continue. He signed with the Giants and was assigned to AA Shreveport. His return, however, turned out to be short-lived. He never made the bigs.

Finken's career began in 1988, taken by the Dodgers in the 21st round of the draft out of the University of Michigan.

He started with the Dodgers at short-season Salem and rookie Great Falls. He hit .255 in 64 games on the year.

After getting cut by the Dodgers to start 1992, he arrived at Shreveport. He hit .231 in his 37 games, with three home runs and six RBI to end his career.