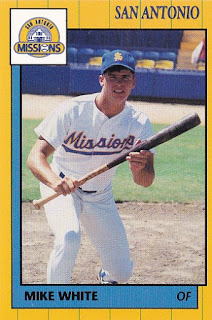 Mike White recalled years later his selection by the Dodgers 19th overall in the 1986 draft out of high school.

He'd hit .532 in his senior campaign, along with 16 home runs and 66 RBI, according to The Knoxville News-Sentinel.

"It was a weird experience," White told The News-Sentinel in January 2016. "I was drafted before Bo Jackson."

White went on to play seven professional seasons, but he found himself unable to turn his experience as a first-round pick into an experience in the majors. He briefly made AAA, but no higher.

White's career began that year in 1986, taken by the Dodgers out of Loudon High School in Tennessee.

White started with the Dodgers at rookie Great Falls. He hit .287 in 67 games. He also picked up a home run and 26 RBI.

He moved to single-A Bakersfield and Vero Beach for 1987. He hit .263 in 64 games that year. He returned to Vero Beach for all of 1988, where he hit .340 to lead the league. He also helped Vero Beach to the playoffs as part of one of the league's best outfields.

White arrived at AA San Antonio for 1988, but quickly regressed. He hit just .227 over 131 games that year. He also missed Dodgers fall instructional league, not invited to play, The Los Angeles Times wrote.

"He's sitting home, trying to figure out why he had such a poor year," Dodgers minor league field coordinator Guy Wellman told The Los Angeles Times late that September of White.