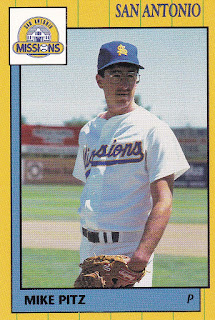 "It can go nothing but downhill from here," Perranoski joked to The Times. "All the pitchers threw strikes, and there were some good defensive plays. A couple of balls might have gone out (for home runs) if it had been windy. But the guys looked good."

Pitz made that spring going into this third season as a pro. He'd make AA that season, but he'd remain there. Pitz pitched out his career at that level. He never made AAA.

Pitz' career began in 1986, taken by the Dodgers in the fourth round of the draft out of the University of the Pacific.

At Pacific, Pitz played both baseball and football, all after bypassing a selection out of high school by the Giants. He won 18 games over his college career and had a 3.06 ERA in 1986. He won all-conference honors in 1984 and 1986.

With the Dodgers, Pitz started with rookie Great Falls. He went 4-5 over 14 starts, with a 3.67 ERA. He also helped Great Falls into the playoffs.

The playoff appearance meant a rematch between Pitz and rival Salt Lake. Pitz had pitched poorly against Salt lake earlier in the year, The Great Falls Tribune wrote.

"I want Salt Lake bad," Pitz told The Tribune headed into the post-season. "I've had two (lousy) games against them this year and I want another shot at those guys."