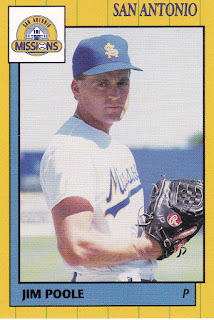 The Orioles were out of it by the time Jim Poole took the mound for them in relief in this late-September 1991 contest, but their opponent the Red Sox weren't.

Poole entered the game with the bases loaded in the fourth inning and proceeded to knock the Red Sox back a peg as he got out of that jam and went on to set down 14 of 15 batters he faced, The Associated Press wrote.

"I was pumped up to play against a team in the pennant race," Poole told The AP afterward. "The adrenaline was flowing, and I almost hyperventilated."

Poole's career began in 1988, taken by the Dodgers in the ninth round of the draft out of Georgia Tech.

Poole started with the Dodgers at single-A Vero Beach. He made AA San Antonio in 1990, then got his call to Los Angeles that June.

He got into 16 games for the Dodgers that year and ended with a 4.22 ERA. Traded to the Rangers that off-season, Poole saw five outings before the Orioles selected him off waivers. He put up a 2.00 ERA over 24 outings with Baltimore.

He arrived with the Indians as a free agent for 1995. In 42 games, he had a 3.75 ERA, won three and lost three. Poole also helped the Indians to the playoffs and the World Series.

In Game 6 of the World Series, though, Poole threw a bad pitch to David Justice, who hit the home run that proved the difference in the 1-0 game. He hadn't given up a home run to a lefty since that May.

"Even though I had that misfortune, getting an opportunity to pitch in the playoffs and the World Series for the Indians was a highlight of my 11 years as a relief pitcher in the majors," Poole told Georgia Tech's RamblinWreck.com years later. "It really was a dream come true."

He played the final three seasons of his career between Cleveland, San Francisco, Philadelphia, Detroit and Montreal, including 51 outings in 1999 with the Phillies.