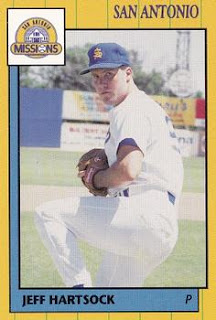 Jeff Hartsock went 12-6 at AAA for the Dodgers in 1991, then he got traded, The Louisville Courier-Journal noted three years later.

The trade led him to a brief stint in the majors in 1992 with the Cubs, but little else.

"A lot of things happened since then," Hartsock told The Courier-Journal after a win as a Louisville starter. "When you get traded for a player with big-league experience, you think you're going to get to make the next move, but it never materialized. You expect more, and you get a little down."

Hartsock spoke to The Courier-Journal in his seventh and final season as a pro. That stint with the Cubs proved his only time in the majors.

Hartsock's career began in 1988, taken by the Dodgers in the seventh round of the draft out of North Carolina State.

"He needs to learn pitch selection.," Gregson told The Tribune. "He's used to getting kids out with hard stuff."

He then split 1990 between AA San Antonio and AAA Albuquerque and spent all of 1991 at Albuquerque.

After an August 1991 game, Hartsock spoke to The Albuquerque Journal about strikouts. He led the league going into that night's contest.

"Ks are nice," told The Journal. "But they're not something I really concern myself with. I just try to get them (batters) out any way I can to help the team. I think the changes I made over last season and through this year are starting to pay off. I'm finally able to reap the rewards."

The Dodgers traded him that September for Steve Wilson.

With the Cubs, Hartsock played 1992 at AAA Iowa. He went 5-12, with a 4.3 ERA, but the Cubs called him up in September. In four outings with Chicago, he gave up seven earned in 9.1 innings of work.