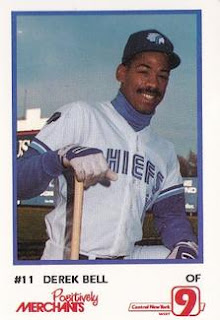 Derek Bell wasn't yet a regular for the Blue Jays in 1992, but he was ready to do what needed to be done to achieve that, he told The Associated Press that July.

"I know my role," Bell told The AP. "I have to be ready when I'm called upon. That means staying sharp with extra batting practice and working on my defense."

Bell did become a regular in the majors, with first the Padres, and then the Astros. By 2002, though, Bell apparently wasn't ready to do what it took. When asked to, he called for the now-infamous "Operation Shutdown" and it cost him his career.

Bell's career began in 1987, taken by the Blue Jays in the second round of the draft out of King High School in Tampa.

In April, Bell hit two home runs in a single game, on his way to 21 on the season. By early June, Bell was hitting .306 with 30 RBIs, The AP wrote. On June 1, he provided the Padres offense, hitting a two-run home run in a 2-1 Padres win.

"I'm just being Derek Bell - relaxing and having fun," Bell told The AP after the game of his success to that point.

Bell stayed with the Astros for five seasons. He recorded more than 100 RBIs twice for Houston, hit over .300 twice and hit double digit home runs four of his five seasons.

By spring 2002, his starter status was in doubt. Bell, though, believed it should have been certain.

"If it ain't settled with me out there, then they can trade me," Bell told The Pittsburgh Post-Gazette. "I ain't going out there to hurt myself in spring training battling for job. If it is (a competition), then I'm going into 'Operation Shutdown.' Tell them exactly what I said. I haven't competed for a job since 1991."

Bell wasn't a starter for the Pirates that year. He also didn't play in the majors again, his career ending after 11 seasons in the majors. His retirement has also gone about as well as the end of Bell's playing career. He's been picked up twice on drug charges.