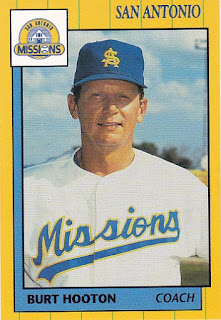 Former major leaguer Burt Hooton knew a perfect game wouldn't come every time. Not all games turn out the way a pitcher wants them to be, he told The Fort Wayne Journal Gazette in 2016 of his advice to pitchers.

"That’s just the nature of professional baseball," Hooton told The Journal Gazette as he served as pitching coach for the Fort Wayne TinCaps. "The question then is what are you going to do from that point forward? No matter if you have a real good game or a real bad game, your job is to get ready for that next game, so that is what I tell them."

Hooton spoke to The Journal Gazette as in the midst of his now-three-decade-long career as a coach in the minors, guiding young hurlers on to the bigs, and also in the majors with the Astros, guiding them once they arrived.

He's served as a coach after a long career as a player that saw Hooton play in 15 major league seasons, hit double-digits in wins nine times and throw a no-hitter in only his fourth big-league outing.

Hooton's long career in baseball began in 1971, taken by the Cubs in the first round of the secondary phase of the draft out of the University of Texas

Hooton debuted with the Cubs quickly, on June 17. He got three starts for the Cubs that year, garnering a 2.11 ERA, and played the rest of the season at AAA Tacoma.

Then came his debut in Chicago for 1972, the club's second game of the year, he threw a no-hitter at Wrigley Field. He gave up seven walks on the cold and windy day, but no hits.

"I was a young kid coming out of Texas, sent to the big city, and doing something like that, I wasn't prepared for the media storm after the game," Hooton told NewsOK years later. "I didn't know how to handle that. It was a little overwhelming."

Hooton started 1981 7-0. That June, he explained to UPI his nickname "Happy Hooton," which stemmed from a lack of shown emotion. He just didn't show emotion.

"But on the other side of the coin, it takes a whole lot to upset me," Hooton told UPI. "And that consistent emotional level helps keep me going. This life is a constant up and down process, and that's what gets me through it all."

He soon started his coaching career. He served as pitching coach at short-season Salem in 1988, then AA San Antonio in 1990. He made AAA Albuquerque in 1995. Then, after four seasons as pitching coach at the University of Texas, he joined the Astros at AAA Round Rock, then got promoted to Houston.

Hooton spent five seasons as pitching coach in Houston, then more back at Round Rock. He arrived at single-A Fort Wayne in 2013 and continued there in 2018.