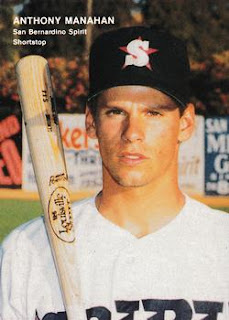 San Bernardino's Tony Manahan had a good day in this July 1990 game, but he also saw his teammates doing well, too, according to The San Bernardino County Sun.

Manahan picked up three hits in the game, including a home run. Teammates had three and four hits, too, The Sun wrote.

"I think right now we've got a lot of confidence at the plate," Manahan told The Sun afterward. "Everybody wants to hit. And you need that because we play in a tough pitching league. That's what I heard at least."

Manahan showed confidence that year and over a career that spanned seven seasons. He made AAA in four of those seasons, but he never made the majors.

Manahan's career began that year in 1990, taken by the Mariners 38th overall in the draft out of Arizona State University. Manahan is the brother of fellow first-round pick Austin Manahan.

Mananan started with the Mariners that year at high-A San Bernardino. He got into 51 games and hit .318. He hit a three-run home run at the end of July based on what he'd heard of the the opposing pitcher, he told The Sun afterward.

"I've never faced him but the guys told me about him," Manahan told The Sun. "He relies a lot on his fastball and he didn't have the juice tonight."

He then lost some time that August due to some arm soreness.