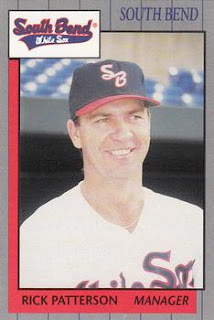 Sports Illustrated writer and former minor leaguer Rick Wolff returned to the minors in 1989, getting back on the field for a story.

"Old man," Patterson told Wolff, "you just did what every old ballplayer has dreamed of doing. To come back one more time and do it again. By golly, you did it!"

Patterson once played briefly himself, but he soon turned his attention to helping others play and move on to higher levels.

He started coaching in college, then turned to the pros. He's credited as managing for nearly a decade there, getting as high as AAA.

Patterson's career in baseball began in 1975, signed by the Mets as an undrafted free agent out of the University of Southern Alabama.

Patterson played for single-A Wausau in each of his three pro seasons, getting a 19-game look at single-A Lynchburg in his second campaign. In his final campaign, he served as a player-coach.

Patterson returned to South Alabama as an assistant coach under former major leaguer Eddie Stanky, the same coach he played for in college. He went on to coach at another college, Livingston University in Alabama.

In 1988, he returned to the pros with the White Sox, managing at short-season Utica.  He moved to South Bend in 1989, managing the club to the league title.

One of his other players in 1989 was infielder Ed Smith. Smith wrote about Patterson in his memoir "EZ Does It," describing Patterson as a manager with an intense personality. Patterson's personality didn't mesh with Smith's, he wrote.

Patterson continued at South Bend in 1990. He protested an August loss after his pitcher Lenny Brutcher slipped on wet grass, according to The Los Angeles Times.

"I don't know the bylaws of baseball," Patterson said afterward, according to The Times, "but it seems to me that if the starting pitcher injures his knee because of the antics of the other team, I suspect there is some liability."

Patterson's two seasons at South Bend, including the club's first-ever championship, led the team to retire his number, 12.