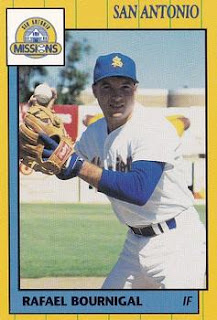 Rafael Bournigal earned praise from his Oakland coaches for his steady defense. He made the routine plays, if unspectacularly, and received regular playing time at short, according to The San Francisco Chronicle.

Four Bournigal, in his fifth season with time in the bigs, regular playing time was enough, he told The Chronicle.

"That's what you worked all your life for, so you can be out there every day," Bournigal told The Chronicle. "You feel like you earn your money that way."

Bournigal ultimately earned his money over seven big league seasons, 365 appearances, between the Dodgers, Athletics and Mariners, getting the most time with the Athletics.

Bournigal's career began in 1987, taken by the Dodgers in the 19th round of the draft out of Florida State University. He was born in the Dominican Republic, but went to high school and college in the United States.

Bournigal started with the Dodgers at rookie Great Falls. He made AA San Antonio in 1990 and then AAA Albuquerque in 1991. He then debuted in Los Angeles in September 1992.

Bournigal got into 10 games for the Dodgers that September. He went 3 for 20 at the plate. He then returned for eight games in 1993.

He got into 40 games and hit .224. That July, he made it to first base, but fell victim to the hidden ball trick. Matt Williams kept the ball and tagged Bournigal out when he stepped off.

"He asked me to step off the bag so he could clean it," Bournigal told reporters later. "You have no friends in this business."