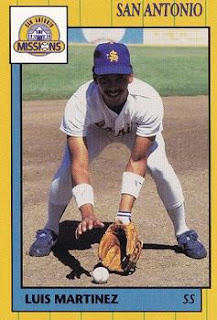 Luis Martinez came to the Dodgers system from a small school, the back of his 1988 Star minor league card notes.

But he also joined a group of good young shortstops in the Dodgers system, the card reads.

"He has shown that he can handle the position well and is a quick learner," the card reads.

Martinez went on to learn enough to see time in seven professional seasons and make AAA. He never did get to put his knowledge to the test in the majors.

Martinez' career began in 1987, taken by the Dodgers in the fifth round of the draft out of Ohio Dominican University. He is a native of Puerto Rico.

Martinez started with the Dodgers at rookie Great Falls. He hit .264 in 64 games and stole 15 bases.

He played 1988 mostly at single-A Vero Beach. He hit .272 over 127 games and finished third in the league in assists with 373. He also led the league in sacrifice hits. He had four hits in an April game and picked up three hits in a July win.

Martinez also got a three-game look at AAA Albuquerque in 1988. He went 1 for 7.

Martinez played 1989 between single-A Bakersfield and AA San Antonio, then all of 1990 at San Antonio. His two-run single in a July game led San Antonio to a 3-2 win against Tulsa. His grounder helped lead to another win days later.