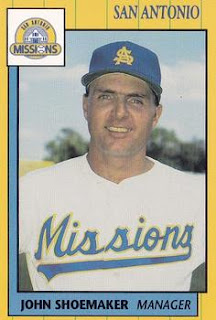 John Shoemaker explained to MLive.com in April 2018 the goal of managing in the minor leagues.

"The goal is that at the end of the year, the player is better than when he started," Shoemaker told MLive. "Everybody here has strengths and weaknesses. You don't want a player to play at a low level. You want to help the player reach his potential."

Shoemaker spoke as the new manager of the Dodgers' single-A Great Lakes Loons. He also spoke with four decades of experience in the minors, initially as a player and then as a manager.

He has also spent those 40 years entirely with the same organization, the Los Angeles Dodgers, as a player, manager and coordinator.

Shoemaker's long career began in 1977, taken by the Dodgers in the 35th round of the draft out of Miami University in Ohio.

Shoemaker's career with the Dodgers started at single-A Clinton. He hit .322 in 76 games. He then returned to school to play his other sport, basketball.

Shoemaker helped Miami to a first-round win over defending champion Marquette. Shoemaker later got drafted by the Chicago Bulls in the sixth round of the NBA draft. Shoemaker stuck with baseball.

Then Walter Alston, former Dodgers manager, helped nudge Shoemaker on to his post-playing career, Shoemaker recalled to The Las Vegas Sun in 2003.

"I credit him for backing me, telling the organization that, 'This would be a good guy to put into the coaching system,' " Shoemaker told The Sun. "I always wanted to get into coaching. If I had asked for my release, not accepting the coaching position in Vero Beach, I felt I'd be out of baseball in a couple of years."

Instead, Shoemaker started his long career as a minor league coach and manager with a coaching job at single-A Vero Beach. By 1987, he made manager and he's largely served as a manager since.

Hall of Fame Dodgers manager Tommy Lasorda, then a special adviser to the club, praised Shoemaker then for winning the award.

"I have known Shoe for a long time and I can say without a doubt that he is one of the hardest workers I know," Lasorda said in a statement. "He continues to leave a great impression on the young ballplayers in the organization and I couldn't be prouder of him on all of his accomplishments."
1990 Minor League Tally
Players/Coaches Featured: 3,003
Made the Majors:1,100-36.6%
Never Made Majors:1,903-63.4%-X
5+ Seasons in the Majors: 457
10+ Seasons in the Minors:276
Posted by Steve78 at 9:47 PM