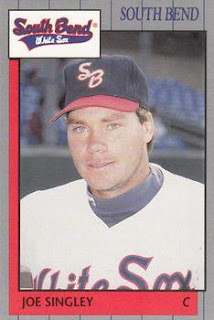 By 1994, both Dickie Noles and Joe Singley were out of baseball. The pitcher and catcher, though, continued to play, according to The Wilmington News Journal, in semi-pro leagues.

"If you've ever played the game of baseball, you find out that you can never get over it," Noles told The News Journal that year. "Once it gets in your blood, it's just something that you have to do."

While Noles made the majors over 11 seasons, Singley did not. Singley played four seasons in the pros, making it as high as AA, but no higher.

Singley's career began in 1987, signed by the White Sox as an undrafted free agent out of Temple University.

Singley turned pro after going to Temple on a football scholarship. He backed up at quarterback.

He started with the White Sox playing at three levels. The catcher got into 45 games between the rookie Gulf Coast League and single-A Peninsula and Daytona Beach. He hit .194.

He returned for a brief stint in the Gulf Coast League in 1988, then played 1989 between four levels. He saw single-A Sarasota, South Bend, short-season Utica and AA Birmingham. He hit .170 over 20 games at Birmingham.

Singley then played his final season in 1990. He saw time at South Bend and Sarasota with the White Sox and at independent high-A Miami. He hit .207 over 68 total games, ending his career.