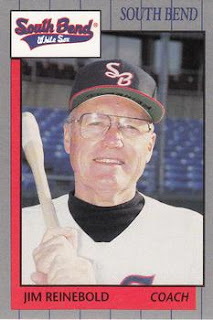 Jim Reinebold looked back on his career in 2015 at the age of 85 and he saw a disciplinarian, according to The South Bend Tribune.

"I was a hard-ass," Reinebold told The Tribune, adding a chuckle. "But years later, I've had so many former players come back to say how much they appreciated the discipline."

He passed away two years after he spoke with the Tribune, at the age of 87.

Reinebold's time as a minor league coach began when the South Bend Midwest League entrant began in 1988. He stayed with the club through 2000 and its switch from the White Sox to the Diamondbacks. He also had brief stints earlier with the Cubs and Athletics organizations, according to his obituary.

In all, Reinebold coached in seven different decades, his obituary reads. After serving in the military - entering during Korea - Reinebold started coaching. His longest stint came at Clay, 25 years, leading his team to the 1970 state championship and racking up 654 wins.

In his 1970 championship year, Clay went 39-3, rattling off 33 straight wins. He retired from Clay in 1988, before taking his pro job with the South Bend White Sox.

Both Clay and the South Bend franchise also honored Reinebold by retiring his No. 4.

"Coach will be missed for his leadership, his devotion to those willing to sacrifice to become better men and women, and his love of his family," his obituary reads.