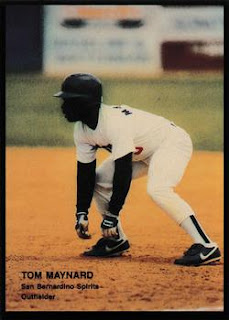 Ellerton Maynard not only showed off his wheels in this June 1990 week, but he also showed other things, according to The Seattle Times.

He stole 11 bases in six games that week. He also picked up 10 hits in 25 at bats, according to The Times.

"He's swinging the bat better, getting some hits," Maynard's manager at San Bernardino Keith Bodie told The Times. "He's had some multi-hit games."

By the time he was done stealing bases that year, Maynard had swiped 80 of them. He stole 87 more the next year between high-A and AA.

Maynard went on to play in six professional seasons. He ran himself into a brief stay at AAA, but he never could run himself to the majors.

Maynard's career began in 1988, taken by the Mariners in the 17th round of the draft out of Miami-Dade College. He is a native of the Virgin Islands. He is also sometimes referred to by the nickname Tow Maynard.

At Miami-Dade, Maynard picked up three hits, one of them a home run, in a March 1988 game. In an April game, he got another three hits. He also stole five bases.

For 1993, Maynard saw time at high-A Riverside, Jacksonville and AAA Calgary. He got into nine games at Calgary, going 3 for 21. It was his final season as a pro.

Over his six professional seasons, Maynard stole a total of 331 bases.

Maynard has since returned home to the Virgin Islands. In 2011, he took over as coach for the St. Croix Educational Complex' varsity baseball program after spending 14 years coaching Little League, according to The Virgin Islands Daily News.

"The program is all about developing the game of baseball," Maynard told The Daily News. "Coaching high school baseball will be a challenge, but I will continue to work with the youth players as well."