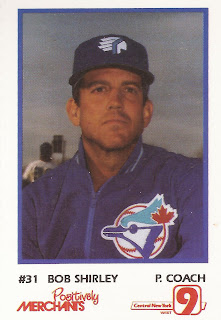 Bob Shirley threw eight innings of shutout ball in that April 1977 contest. Only a ninth inning error in the field, and a tired arm, prevented him from finishing the game and recording a shutout, UPI wrote afterward.

Still, Shirley picked up the win, his Padres taking the game 12-4. It was Shirley's first victory in the majors in his first start in the majors.

"I didn't have anything left when I was taken out," Shirley told UPI afterward. "I would have been pleased if we had won 12-11. Actually, when I went out there, I was just hoping to get out of the first inning."

Shirley would go on to get 11 other wins that year for San Diego, but he would also pick up 18 losses for the fifth place Padres.

Shirley's future, though, was in both relief work and starting. He would go on to be both a starter and reliever over 11 major league seasons. Later, Shirley would have a brief career as a coach and manager in the minors.

Shirley's professional career began in 1976, taken by the Padres in the first round of the January secondary draft, out of the University of Oklahoma. He started at AA Amarillo then moved to AAA Hawaii. Between them, Shirley went 14-10 in 29 starts.

In 1979, Shirley again had a sub-4 ERA on the season, but he again had a losing record, 8-16. He picked up his eighth win in late September, against the division-leading Reds.

"Ninety-nine percent of the people don't look beyond the 16 losses," Shirley told The Associated Press afterward. "Hey, this team has lost 91 games. It's frustrating for everybody."

Shirley stayed with the Padres through 1980, sent to the Cardinals for 1981 in an 11-player deal. After spending the season with the Cardinals, Shirley moved on to the Reds in another trade. In five of Shirley's first six seasons, his ERA failed to hit 4. In his only season above 4, his ERA was still 4.08.

In 1985, it was 2.64 in 48. It was also a season where Shirley went stretches where he wasn't used. But he still stayed ready. After an injury in June, Shirley was a starter again.

"You don't take the highs and live off them, and you don't let the lows get you down," Shirley told The New York Times that June. "The only thing I had to prove is that I want to win."

Shirley continued with the Yankees into 1987, his tenure there ending amid allegations of a friendly clubhouse wrestling match with Don Mattingly ended with Mattingly injured. Shirley was released soon afterward, but both denied there ever was such a match or incident. Mattingly told reporters soon after that he injured himself fielding grounders, according to The AP and The Times.

Released, Shirley soon signed with the Royals that July, but only got into three more contests. Shirley returned for spring 1988 with the Blue Jays, but he didn't make the team. He played the year at AAA Syracuse, also serving as a coach.

He moved to the manager's office in 1989 with the short-season St. Catharines Blue Jays. In 1990, he was back with the Chiefs, his final season as a coach, Shirley resigned the next spring, ending his coaching career without making the majors.