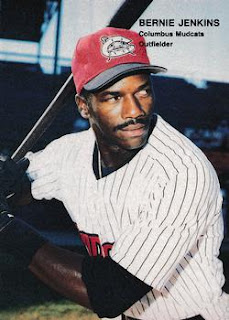 As the spring wound down in 1995, Bernie Jenkins knew reality could set in, according to The San Francisco Chronicle.

A judge's ruling put the start of the season in doubt for players like Jenkins, the replacement players.

"It will disappoint you, but we knew it when we got here," Jenkins, an outfielder for the replacement Giants, told The Chronicle.

Jenkins played with the Giants that spring after a six-season career that saw him make AA, but not the bigs. He extended his playing time that year, but did so briefly. He got into six regular-season games back at AA, ending his career.

Jenkins' career began in 1988, taken by the Astros in the seventh round of the draft out of St. Francis College in Brooklyn.

Jenkins started with the Astros at short-season Auburn. He hit .244 over 58 games. He got hit by a pitch and scored in an August game.

Jenkins switched to the Reds system for 1992, playing between single-A Cedar Rapids and AA Chattanooga. He hit .291 on the year. He played his final full season in 1993 at Chattanooga. He singled in a run in an August game, and hit .252 overall.

After not playing in 1994, he returned for spring 1995 and then got into five final games at AA Shreveport, ending his career.