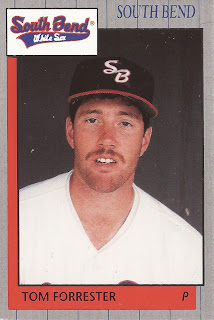 Tom Forrester closed out his high school career in 1982 with a gem, according to The Asbury Park Press.

He finished it out with a no-hitter, picking up his 13th win, The Press wrote.

"I never pitched better," Forrester told The Press afterward. "It was my last game and I wanted to make it my best; I wanted to go out in style."

Forrester went out of high school to play in college and the pros. After that pitching gem, though, he ended up turning pro as an infielder. He later briefly returned to the mound. Overall, he made it as high as AAA, but never made the majors.

Forrester's career began in 1985, taken by the White Sox in the first round of the January draft out of Miami-Dade College. Forrester is also credited by his formal name, Thomas Forrester.

Forrester started with the White Sox at single-A Appleton. He got into 96 games as a first baseman, hitting .264. He hit 15 home runs, his 12th in a July game against Madison. He also knocked in two runs in an August game on a double and had two RBI in another game that month..

Forrester split 1987 between Birmingham and AAA Hawaii. He hit .190 at Hawaii, but .289 at Birmingham. He hit a home run in a spring game for the White Sox. He hit another home run in an Aug. 27 game. Three days later, he hit three in the same contest.

Forrester played 1988 completely back at Binghamton. He hit .240, but went 4 for 5 in a July game, hitting three doubles. He tried his hand at AAA pitching again in 1989 at Vancouver. His average ended up at .202.

Forrester then returned to pitching. He pitched in six games at Vancouver, then played all of 1990 on the mound. He got into 13 games at South Bend and 20 games at high-A Sarasota. He had a 3.48 ERA, saving five games.

Forrester played one final season in 1991, getting into 26 games back in the field at AA Jackson with the Astros and in Mexico, ending his career.