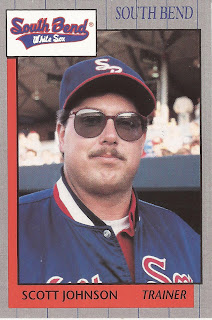 Scott Johnson added another award to his resume in summer 2015 - best trainer in the International League, according to MiLB.com.

For the longtime Charlotte Knights trainer it was his third such award in 13 seasons with the club, MiLB.com wrote.

"I'm honored to receive this award," Johnson said, according to the site. "I would like to thank the other trainers in the International League for voting for me this season. It truly means a lot knowing that this award has come from my peers."

Johnson's career as a trainer has now lasted nearly three decades. He started his professional career in 1989 with the White Sox at single-A South Bend and continues with the organization's AAA team in Charlotte for 2017.

Johnson graduated from North Dakota State in 1988, serving three summers as a trainer for the Goldpanners of the Alaska Baseball League.

Johnson spent three seasons in South Bend, then moved to high-A Sarasota. He earned spots as a league all-star trainer in 1989 and 1992.

He then went on to serve as trainer at AA Birmingham from 1995 to 1997. He first arrived at Charlotte in 1999, after first hitting AAA at Calgary in 1998. He served as for Venezuela in the 2000 Caribbean World Series.

Johnson won the International League Trainer of the Year award with Charlotte in 2000 and 2001, as well as 2015.