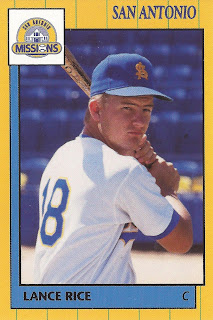 Lance Rice felt he needed to step up and help his Great Falls Dodgers, so he stepped up to the plate as a right-handed hitter, according to The Great Falls Tribune.

The switch-hitter had helped his team to the playoffs. He also seemingly had been in a slump.

"Right now I'm a better hitter right-handed," Rice told The Tribune after he'd knocked a single to give his team a lead for good. "This is the playoffs so we've got to do what we do best. It was about time I did something to help out."

Rice helped out that year and in a total of eight more pro campaigns. He made it briefly to AAA twice, but never made the majors.

Rice's career began that year in 1988, taken by the Dodgers in the 15th round of the draft out of Oregon State University.

Rice started with the Dodgers at Great Falls. He hit .283 and knocked in 27. He  then moved to single-A Bakersfield for 1989. The catcher hit .222 there, with five home runs.

He made AA San Antonio in 1990 and returned there for much of 1991 and 1992. His only time away from San Antonio those three seasons came with a one-game look at AAA Albuquerque in 1991. He went 1 for 3 there, with a double.

Rice returned in 1995 with the Tigers, where he played at AA Jacksonville and got 15 games at AAA Toledo. He then finished out his career in 19966 with the Orioles at AA Bowie.

Rice has since gone on to change sports, to golf. In 2007, he participated in the Kenridge Invitational, a golf tournament in Virginia, where he settled. He then spoke to The Charlottesville Daily Progress about his baseball career and about leaving after nine seasons.