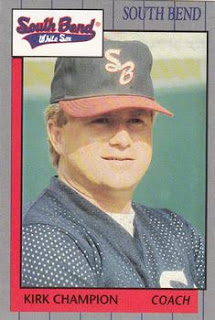 But he did leave Southern Illinois, to join the White Sox organization. It's that job he hasn't left.

"A lot of guys bounce around," Champion told The Post-Dispatch. "I have just been fortunate enough to stay in the same organization, with a lot of different role changes along the way."

Champion spoke to The Post Dispatch in January 2017, as the White Sox minor league field coordinator. He started with the club nearly three decades earlier, in 1989. In the years since, he's coached from single-A South Bend to AAA Charlotte, though never in the bigs.

Champion arrived with the White Sox and South Bend for 1989, continuing there through 1991. In 1990, he coached opposite his brother Keith Champion, who served as manager of the fellow Midwest League squad, the Springfield Cardinals.

Champion moved up to high-A Sarasota for 1992, then AA Birmingham for 1993. He coached at Birmingham for four seasons, before moving up to AAA Nashville for 1997. He watched his Nashville hurler Rich Pratt take a tough loss in July.

"He was moving his pitch in and out," Champion told The Nashville Tennessean. "That's the second straight game he's pitched where he lost 3-0."

Champion stayed coaching at AAA through 2001, then became a coordinator.

In October 2014, he worked to ensure prospect Tim Anderson could stick with a transition to shortstop, according to The Chicago Tribune.

"He has strong hands and can show power to different parts of the field," told The Tribune. "It has been fun watching him grow up because (the coaches) constantly have drilled him in the things it takes to become a shortstop."