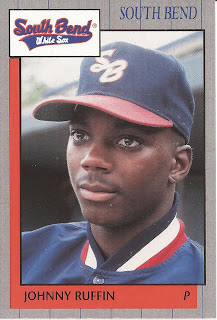 Johnny Ruffin didn't feel he was ready for the majors in spring 1992. He still had much to learn, he told The Chicago Tribune that March.

"I'll stay another year, another two years in the minor leagues and develop that," Ruffin told The Tribune. "I don't want to get up and stay a year. I want to stay 10, 15 years."

Ruffin did stay another year, debuting in the majors in August 1993. He went on to a career that saw time in six major league seasons.

But, while he had success on the field, Ruffin ran into problems off it. He was twice arrested during his career, once on a sex offense.

Ruffin's career began in 1988, taken by the White Sox in the fourth round of the draft out of Choctaw County High School in Alabama.

Ruffin played 1992 between Sarasota and AA Birmingham, and then made AAA Nashville in 1993. He went to the Reds in a 1993 deadline deal and played at AAA Indianapolis before making his major league debut.

"What does he have to do to get to the big leagues?" asked Indianapolis pitching coach Mike Griffin asked The Indianapolis Star. "Exactly what he is doing now. Actually, I would love to see him establish a little better changeup. But he doesn't really need too much. He's not far away."

Then came his first run-in with the law, the sex offense. In January 1994, a woman in Sarasota told police Ruffin sexually assaulted her in a hotel room. He later pleaded no-contest to attempted sexual battery. He received probation.

"I apologize to (Reds owner) Mrs. (Marge) Schott, the entire Reds organization and to the fans of Cincinnati for the disappointment and embarrassment this regrettable incident has caused," Ruffin said in a statement after his plea.

On the field that year, Ruffin got into 51 games in relief and picked up seven wins to two losses. He also had a 3.09 ERA.

He returned in 1995 for 10 outings and then in 1996 for 49. He was arrested for a second time in April 1996, after not responding to a speeding ticket and not having a license. He later pleaded no contest and received probation.

After 1996, Ruffin played the next three years in the minors. He also got a one-game look in Japan, with Kintetsu.