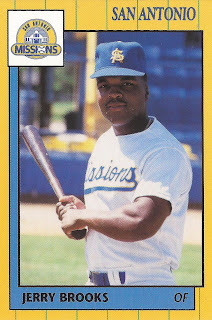 Dodgers manager Tommy Lasorda spread some praise around his minor leaguers in early spring 1990, according to The Los Angeles Times.

Among them was young hitter Jerry Brooks.

"Mike Piazza and Carlos Hernandez, a couple of catchers, are really swinging the bat," Lasorda told The Times after an intrasquad game between non-roster players. "And Jerry Brooks is doing real well in the outfield."

All three of those minor leaguers did well enough to make the majors - Piazza the Hall of Fame. Brooks' stays, though, proved brief. In a pro career that spanned 10 seasons, Brooks made it to the bigs for nine games in 1993 and eight final contests in 1996. He also saw time in Japan.

Brooks' career began in 1988, taken by the Dodgers in the 12th round of the draft out of Clemson University. He played his high school ball at Syracuse's Fowler High.

After two more seasons back at Albuquerque, Brooks made his debut in Los Angeles in September 1993. In his nine games, he picked up two hits in nine at bats. One of those hits went for a home run.

Along the way, Brooks also picked up catching. In spring 1993, he had the task one day of catching knuckleballs from Tom Candiotti.

Brooks returned to the minors and AAA for 1994 and 1995. He moved to the Reds and AAA Indianapolis for 1995. He compared the pitching staffs of the two AAA clubs in August 1995 to The Indianapolis Recorder.

"Last year, when I was in Albuquerque, we had a younger staff with great stuff," Brooks told The Recorder. "But these guys know what they're doing out there. It makes so much easier for catchers to put down signs and receive a game."

Brooks returned to the majors in 1996 with the Marlins. He went 2 for 5, with three RBI.

Books then played 1997 and 1998 in Japan with Nippon Ham. He hit 16 home runs there his first year and 25 his second. He then rounded out his career with two more seasons, one in the Mets system and one in Mexico and independent ball.

Brooks has since settled in Texas, where he runs a car dealership, his hometown Syracuse Post-Standard wrote in 2011 as he made the Syracuse Baseball Wall of Fame. He called his induction a great honor.