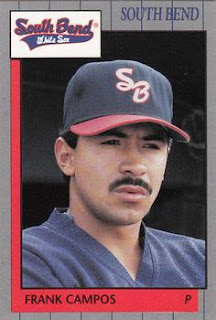 Frank Campos came on late in this July 1988 game and picked up the win, according to The Associated Press.

That is, he came in late, as in to start the 19th inning - and he still pitched three innings to pick up the victory in the South Atlantic League's longest game in league history, The AP wrote.

Campos finished out that game in his second season as a pro. He went on to play in six more. He made AAA, but he didn't make the bigs.

Campos' career began in 1987, signed by the Cubs as an undrafted free agent out of his native Venezuela.

Campos started with the Cubs at rookie Wytheville. He got into 18 games, started two and saved four.

Campos started 1990 at single-A Peoria, but was soon traded to the White Sox for Bill Long. He played out the year between single-A South Bend and short-season Utica.