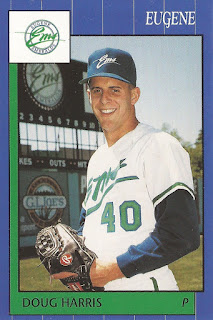 Asked about the Oregon weather upon his arrival at short-season Eugene in 1990, Royals draft pick Doug Harris indicated it made no difference to him, according to The Eugene Register-Guard.

"I'm not the kind of guy who gets excited about things," Harris told The Register-Guard. "I just want to come out and do my job."

Harris went on to do his job over seven seasons in the pros. He never could do it well enough to make the majors, but he did earn a lengthy post-playing career in player development. And he's also faced a different, more serious job: Fighting cancer.

Harris' career began that year in 1990, taken by the Royals in the fourth round of the draft out of James Madison University.

He moved to the Orioles and Marlins systems for 1995 and 1996 and saw brief stints at AAA, but his playing career ended with 1996.

He then started his post-playing career as a scout for the Rangers. He stayed with Texas through 2008, becoming a cross-checker. He made advance scout with the Indians in 2009, then, in 2010, he became the Nationals' director of player development.

Harris would soon be credited with helping Bryce Harper and Anthony Rendon develop quickly. He later became the club's assistant general manager and vice president. He even was mentioned in 2017 as a candidate for the Braves top GM job.

Along the way, though, he was diagnosed with leukemia and underwent a bone marrow transplant in 2016. He then fought a recurrence in mid-2018.

After his first fight, Harris talked about a viral video that asked the question "how you living?" according to The Carlisle Sentinel.