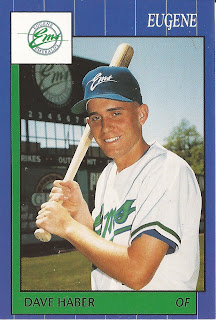 David Haber had himself a big game in this June 1990 contest, just not big enough, according to The Eugene Register-Guard.

Haber picked up three hits in four at bats going into the ninth inning. He also scored a run. In the ninth, though, his team down by one with a man on first, Haber struck out, The Register-Guard wrote.

Haber had that game near the start of his pro career. He played that year and the next, but he never made it out of short-season ball.

Haber's career began in 1990, taken by the Royals in the 16th round of the draft out of the Catonsville Community College. He was also credited as Dave Haber.

He played his high school ball at Glen Burnie. He played in the 10th annual Oriolelanders game and  was described as a standout. He also made in the Crown all-state squad

Haber went on from Glen Burnie to Valencia Junior College and Catonsville. He then caught the eye of the Royals.