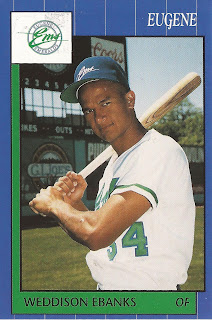 A native of Florida Weddison Ebanks played his college ball in Utah and started his pro career in Oregon.

To start that first pro season, he told The Eugene Register-Guard he was happy to be in that part of Oregon, as opposed to Portland.

"Somebody stole $300 from me the last time I was there," Ebanks explained to The Register-Guard.

Ebanks' career began and ended that year in 1990, taken by the Royals in the 31st round of the draft out of Utah Valley Community College. He played his high school ball at Lake Worth High School in Florida.

In April 1989, he hit a three-run home run for Utah Valley in a win over Snow College, according to The Deseret News.

With Eugene, Ebanks got into eight games. He went 1 for 4 with a run scored in one June game. Overall, he picked up three hits and two RBI for an average of .188.