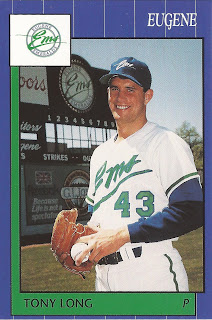 Tony Long lasted through the fifth inning for his short-season Eugene Emeralds in this July 1990 contest, according to The Eugene Register-Guard.

He got pulled not because he slowed - he'd given up just three hits and one run in that span - but because he hit his pitch limit, The Register-Guard wrote.

"Long's kind of mean and nasty," his pitching coach Bernie Flaherty explained to The Register-Guard after Long picked up the win. "He goes after people."

Long gave that performance in his first season as a pro. He went on to play in four more campaigns. He never made AAA.

Long's career began that year in 1990, taken by the Royals in the 22nd round of the draft out of Montgomery College in Maryland.

Long lettered in both baseball and basketball in high school. After Montgomery Junior College, he then started with the Royals at Eugene.