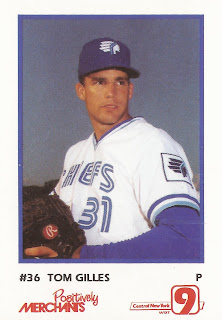 Tom Gilles' time in the majors was brief, only two games. But, speaking to The Bureau County Republican in 2007, Gilles noted he still got there.

“I’ve got a major league card. Not many people can say that,” Gilles told The Republican as he coached local youth. “You get that status. Once you’re a major leaguer, you’re always a major leaguer. They don’t care if you’re there a day or 10 years. You wore that uniform.”

Gilles got the title of major leaguer on June 7, 1990, called up to play with Toronto. His second and final game came the next day, ending his short major league career.

Gilles began six years earlier, with the Yankees. The pitcher was taken in the 47th round of the 1984 draft.

With the Yankees, Gilles played as a third baseman for two seasons at short-season Oneonta, but never caught on. After a year away from the pros, he returned as a pitcher with the Royals in 1987,  at single-A Appleton.

By 1988, Gilles was in the Twins system, playing at single-A Kenosha and AA Orlando. His ERA between the two was 3.43.

In 1989, Gilles started at AA Knoxville with the Blue Jays system, but spent the majority of his time at AAA Syracuse. Gilles got into 29 games with the Chiefs, posting a 3.55 ERA.

Gilles pitched his first game against Minnesota, an inning of work where he gave up two hits and one earned run. In his second and final outing, Gilles only pitched a third of an inning, but he got the win. George Bell hit a three-run shot the next half inning to give Toronto the lead and Gilles the win.

Gilles returned to Syracuse to finish out the year, his final year in affiliated ball. Gilles played parts of two more seasons in independent teams and his playing career was done.

Speaking to The Republican in 2007, Gilles said he was blessed to make it to the big leagues. But, in his heart, he knew he could have pitched eight or 10 years.

"Then again, they didn’t have to bring me up either," Gilles told The Republican. "It is what it is. I did all I could. I went a long way. I was released three times before I ever made it, and was told many times to do something else. I never gave up. If you believe in yourself and got good ability, you can do it.”