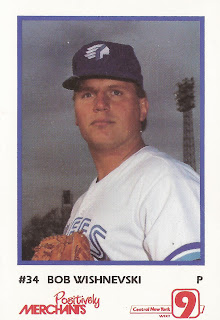 Billed as one of the AAA Brewers top relievers in 1992, Rob Wishnevski spoke to the Northwest Indiana Times about how long he'd play.

Once it wasn't fun anymore, he told The Times, he'd get out. But the sixth-year professional also didn't see that day as coming soon.

"Every day it's fun to come to the ballpark," Wishnevski told The Times. "We play jokes on each other. It's just a bunch of good guys."

Wishnevski went on to play in several more seasons, including one in Japan. But, in more than a decade as pro, he never got to go to a major league ballpark as a player.

Wishnevski's career began in 1987, taken by the Blue Jays in the third round of the draft out of Kishwaukee College in Illinois. Wishnevski was also credited as Bob Wishnevski.

For 1989, he made it to both AA Knoxville and AAA Syracuse. He started the year at Knoxville, made the Southern League All-Star team and got to face the major league Blue Jays in an exhibition, according to The Newport News Daily Press. He threw three scoreless and soon made it to Syracuse.

He played between Knoxville and Syracuse again in 1990. He got into nine games at Syracuse and 20 at Knoxville. He threw a seven-inning no-hitter against Charlotte in June.

Wishnevski started 1992 back at Knoxville, but moved to the Brewers and AA El Paso in a mid-season trade that sent Candy Maldonado to the Blue Jays. He got into 13 games down the stretch and turned in a 1.04 ERA. He also participated in a 17 strikeout game with two other hurlers.

Wishnevski played the next three seasons at AAA with the Brewers, Cardinals and Rangers. He got into 41 games, starting eight, for AAA Oklahoma City in 1995.