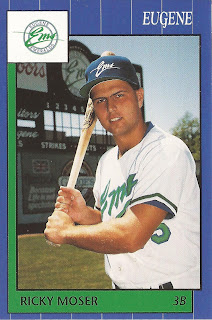 Ricky Moser accomplished a rare feat in this June 1990 game at short-season Eugene - he picked up two hits in the same inning, The Eugene Register-Guard wrote.

Moser picked up an early single in the frame, then came around to score on an error, The Register-Guard wrote. He then knocked another base hit later and scored again on a sacrifice fly.

While Moser picked up two hits in that inning, he couldn't pick up enough hits that year to stay on. He played that single season as a pro.

Moser's career began that year, taken by the Royals in the 49th round of the previous year's draft out of Polk State College in Florida. Moser was also credited as Rick Moser.

Moser won district player of the year honors at Polk. He signed with the Royals just after the draft, but he didn't hit the field for them until 1990.

He arrived at Eugene in 1990 after starting the season in extended spring training. He played the year between high-A Baseball City and Eugene.

At Eugene, Moser went 2 for 4, with a run scored in one June game. He gave his team some late hope with a lead-off walk in the ninth inning of a one-run game the next night, but his team couldn't bring him around. He then went 3 for 4 in another game that month, with a run scored and an RBI.