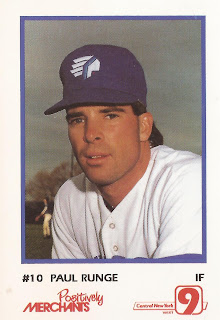 Paul Runge's Danville team in 2009 included a dozen newly drafted players and some players returning from the previous year. The ones returning, manager Runge had hoped wouldn't return, that they would have moved up from the rookie league team.

"Unfortunately, these guys, you'd like to see them with one of our full-season clubs at this point in time, but they're not and you can't cry over spilled milk," Runge told The Danville Register & Bee that June.

"Some of these guys needed to improve in some areas of their game," Runge told the paper. "They came back to Orlando, they went through extended spring training and hopefully they're all better players and hopefully the'’ll get an opportunity to demonstrate that while they're here in Danville."

Runge was working to develop future Atlanta Braves players, managing the short-season Appalachian League team in Danville. Developing young players is something Runge has worked at for much of the past two decades, managing from rookie ball to AA.

Runge took up managing after a professional playing career that spanned 12 seasons, eight of those including time in the major leagues.

Runge's playing career began in 1979, when he was drafted by the Braves in the ninth round out of Jacksonville University. He played that year at rookie league Kingsport, the Braves' entry in the same league he would manage in 15 years later.

He rose quickly, hitting AA Savannah in 1980, then AAA Richmond and Atlanta in 1981. Runge played in 10 games for Atlanta that year, going 7 for 27 with two RBIs. He also committed two key errors in a Braves loss to the Dodgers Sept. 29.

Runge would return to Atlanta each year through 1988, getting into a total of 183 major league games. He also got a total of four home runs and 26 RBIs.

His first home run came in July 1985, but it wasn't a ball over the fence, it was an inside-the-park home run. His other three home runs all came in 1987, two in August. His second career home run helped chase Dodger starter Ken Howell Aug. 2.

In his final year, 1988, Runge saw his most major league action, 52 games worth. He hit just .211, below his career average of .232. Two more seasons at AAA, the first with the Padres and the second with the Blue Jays, and Runge's playing career was over.

By 1993, Runge's player development career began, taking the helm of the Braves' Pioneer League team at Idaho Falls. The next year he was in Danville for a season, then short-season Eugene. He managed AA Greenville from 1999 through 2001, then he returned to Danville, where he has remained.

In all, Runge's 2010 season at Danville was Runge's eighth heading a Danville team. He also, in 2008, was honored by Danville with his own bobblehead.

"It's quite an honor," Runge told GoDanRiver.com before the bobblehead giveaway in July 2008. "I never really ever thought about anything like that. I'm looking forward to it and it just so happens that my wife and family is here, my two girls, so they'll be anxious to see what it looks like."